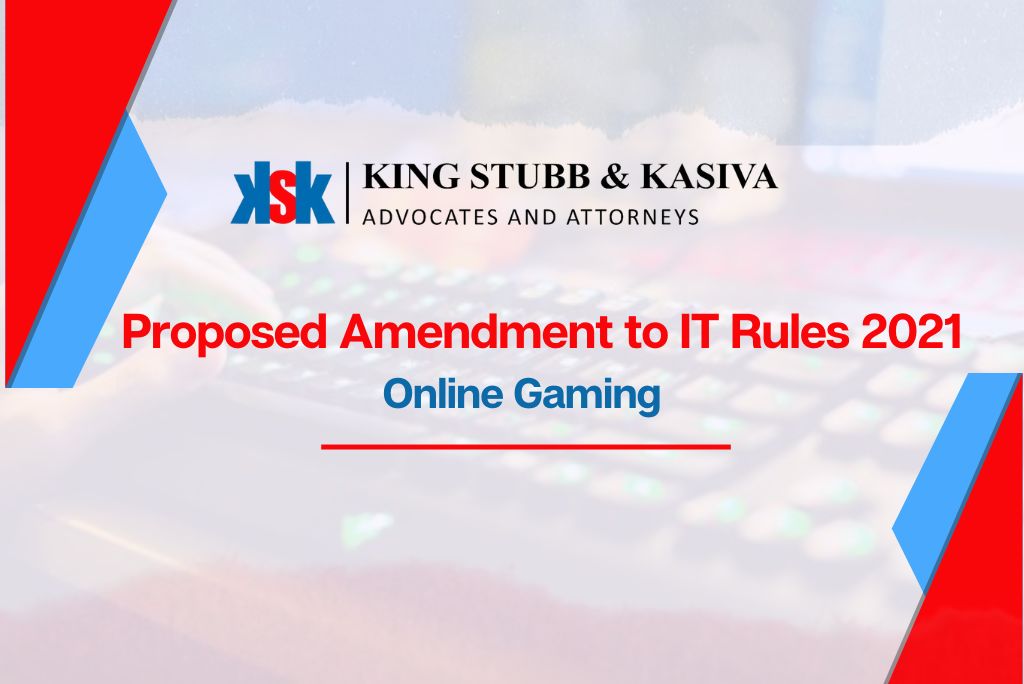 The Government of India has been proactive in including theonline gaming industry within its regulatory and legislative domains. Over the years the Government has been closely monitoring the activities within the industry and has identified certain loopholes within the same. Among the many other regulatory reforms, IT (Intermediary Guidelines and Digital Media Ethics Code) Rules, 2021 within the intent and objective to legislatively compartmentalize legitimate online gaming platforms and illegitimate online gambling platforms.

These rules mandate a self-regulatory organization (SRO), self-regulatory framework, mandatory KYC verification of players, the appointment of compliance and nodal officers, and having a physical address in India. These rules also mandate the compulsory advertising of the financial risk involved for the users. The rules also forbid the portrayal of violent, sexual and abusive content through the medium of the online gaming platform.

However, despite the fact that the government revised the Allocation of Business Rules, designating MeitY as the nodal ministry for online gaming, this does not grant the capacity to exercise this authority. In order to do this, a specific legislative law is necessary. On the other hand, rather than going via parliament, the IT Rules that were created under the IT Act have the goal of expanding the scope of online gaming regulation that is covered by the IT Act.

In addition, online games are expected to show a registration mark that was provided by an SRO. SROs will be required to register with MeitY and to guarantee that its members comply with IT regulations before acquiring the mark. On social media websites like Google and Facebook, the commercial promotion will be restricted to the businesses that have purchased the mark. Prior to accepting advertising, companies involved in social media are required to check their registration status and maintain communication with the SROs.

The suggested standards ensure that self-regulatory organisations will only allow skill-based online games if they are implemented. In addition, the registration emblem of the self-regulatory body will be displayed on each game to ensure that marketers, law enforcement agencies, influencers, and any other stakeholders can differentiate between legal skill games and unlawful gambling games.

In accordance with the terms of the draft, gaming intermediaries will be required to register and enlist all games with the self-regulatory organisation. In addition to this, they are required to select three resident employees to fill the roles of a grievance officer, a compliance officer, and a nodal officer. They must also have a physical residence in the area.

It will boost the online gaming industry’s openness, consumer safety, and investor confidence. This may also allay the concerns of a number of state governments, who have expressed concern that gambling sites that use real money lead to addiction and personal bankruptcies.

According to the draft, online gambling intermediaries would be mandated to additional due diligence, in a manner comparable to that as required of significant social media intermediaries. In addition to this,certain members of the gaming sector are concerned that the new requirements will make it more difficult to comply.

All intermediaries in online gambling shall be required to register with a self-regulatory organisation that will be established with the IT ministry. Either a section 8 company under the Companies Act of 2013 or a society under the Societies Registration Act of 1860 must constitute this organisation.

In spite of this, the composition of the governing body cannot serve as the principal justification for overturning any decision reached by the self-regulatory body. The Ministry of Information and Communications Technology may consult any other government ministry or agency prior to the establishment of any self-regulatory organisation.

To be eligible for registration with a self-regulatory body, an online game may not offer online gambling or betting, nor may it contain anything that is not in the interest of India's sovereignty and integrity, defense, security, friendly relations with foreign states, or public order, or that incites the commission of any cognisable offence. Every registered online game will prominently show its registration with the self-regulatory organisation.

Unquestionably, the proposal is set to stimulate industry expansion, create more job opportunities and ensure the strengthening of India's position in the global gaming map. This step shall serve to positively impact the Online Gaming Industry and establish India’s role as a major and emerging online gaming hub.